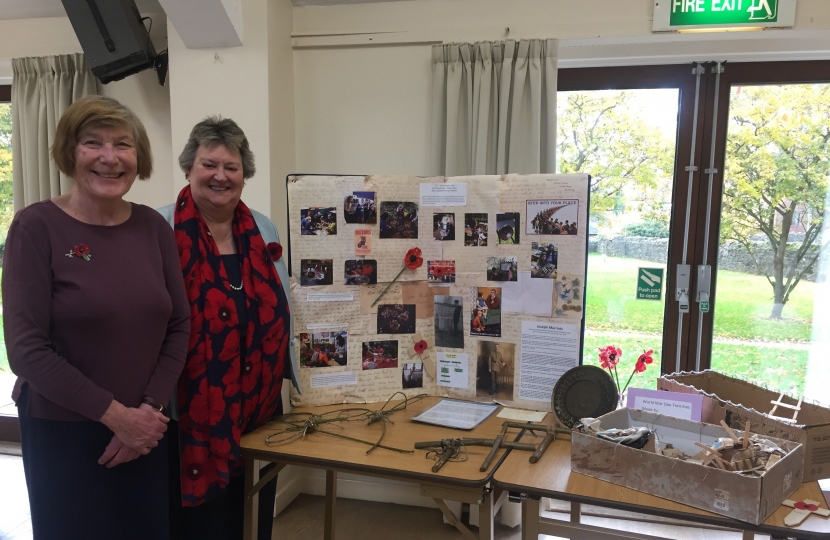 The MP for South Derbyshire, Heather Wheeler, today joined residents from Ticknall as they remembered those who made the ultimate sacrifice for their country in the First World War.

An exhibition is being held in Ticknall Village Hall, organised by Maggie Fenby-Taylor, which takes a closer look at the effect of the conflict on the village and its residents. It also displays memories from those who had family members who were a part of the war effort between 1914 and 1918.

Earlier this year, Heather also visited St George’s Church in Ticknall and met with Paul Colleyshaw who has been a key player in obtaining a grant of some £11,500 towards the cost of restoring the Whitehurst Clock which has been present in the church for many years. Other contributors to the cost of the restoration include the Parish Council, Parochial Church Council and the Ticknall Historic Society.

The clock is now back in situ and will chime at 11am on Remembrance Sunday exactly 100 years after the end of the Great War.

Commenting on her visit, Heather said:

“I really was very moved by the content of the exhibition and it is a striking reminder of the terrible toll that war has not only on those active within the conflict, but those that are left behind.

Maggie and her team of volunteers have put a huge amount of effort into this poignant exhibition and I would encourage anyone with a little spare time over the next two days to pay Ticknall Village Hall a visit.

That the Whitehurst Clock will once again chime at 11am on Remembrance Sunday is another fitting tribute to those who made the ultimate sacrifice for our nation.”