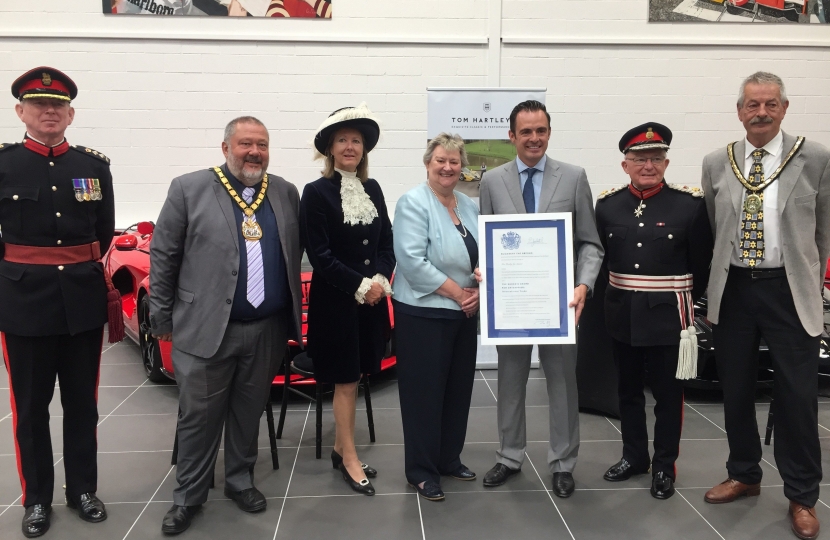 South Derbyshire MP, Heather Wheeler, attended the presentation of the Queen’s Award for Enterprise in International Trade to Tom Hartley Junior by the Lord Lieutenant of Derbyshire, Mr William Tucker.

The business won the award for increasing overseas sales from £14.5m to £33.3m, which represents an astonishing overall growth of 130 per cent. Their market is global, extending from the USA to New Zealand and it is their superb customer service which has been instrumental in their amazing success.

“I was delighted to be there to see Tom Hartley Junior receive the award on behalf of his business. As the Lord Lieutenant pointed out, Queen’s Awards are difficult to achieve as many hundreds of companies are put forward for them, and Tom and all of his staff can feel rightfully proud.”

Tom said they were honoured to receive such a coveted award and how very proud he was of his team and thankful of their input in achieving it. He added how fantastic it was to host so many dignitaries at the ceremony and gave his assurance the company would not rest on its laurels, they would celebrate the award but, as a team, they were motivated to keep moving forward.

“To have grown the business so successfully in just four years is testament to the dedication and hard work of Tom and his team and, having met them, I am sure that growth will continue.”