94,000 meals claimed so far in South Derbyshire through the Eat Out to Help Out Scheme 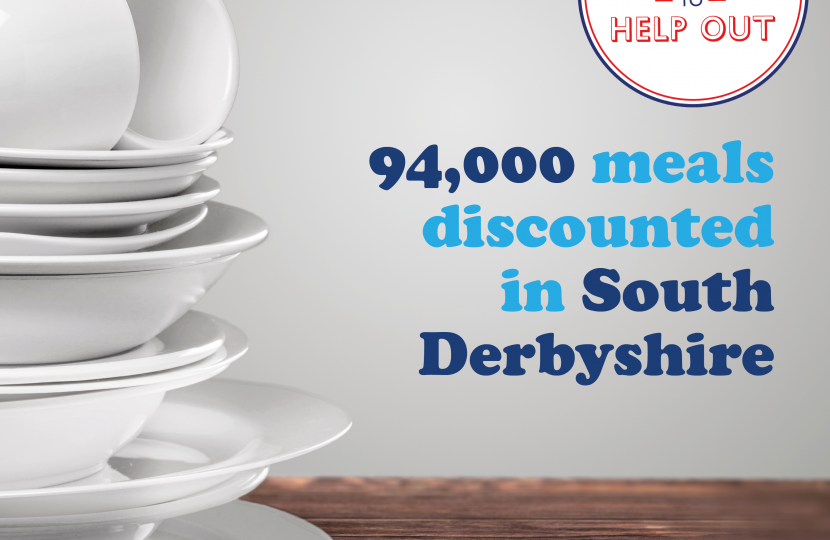 The Eat Out to Help Out scheme has been a fantastic success with over 100 million meals being claimed for. It is estimated to have saved 1.8 million jobs in hospitality. In South Derbyshire alone 94,000 meals were claimed with 66 businesses taking part.

This number is likely to grow with restaurants having until the end of September to claim back the 50 per cent government discount. On the final day of the scheme (31st August) bookings were up by 216 per cent across the UK, which is a massive boost to the hospitality industry.

I would like to thank everyone for taking part and supporting local businesses, especially here in South Derbyshire. £584,000 of claims have been made locally, which has been a huge support to the industry.

Throughout August, on Monday, Tuesdays and Wednesdays, bookings increased on average by 53 per cent across the UK compared to the same days in 2019. Despite the scheme ending, some restaurants have continued to offer discounts and we have seen a 2 per cent rise in bookings on Tuesday 1st September compared to 2019.

There had been an upward trend in the scheme’s popularity since it launched, with 10.5 million meals claimed for in total in the first week, 35 million meals in the second, 64 million in the third and over 100 million by 31 August.

It is important that we continue to support local businesses but I would like to thank everyone for taking part, following guidelines and supporting South Derbyshire businesses.

This Government is committed to a smarter approach to sentencing.