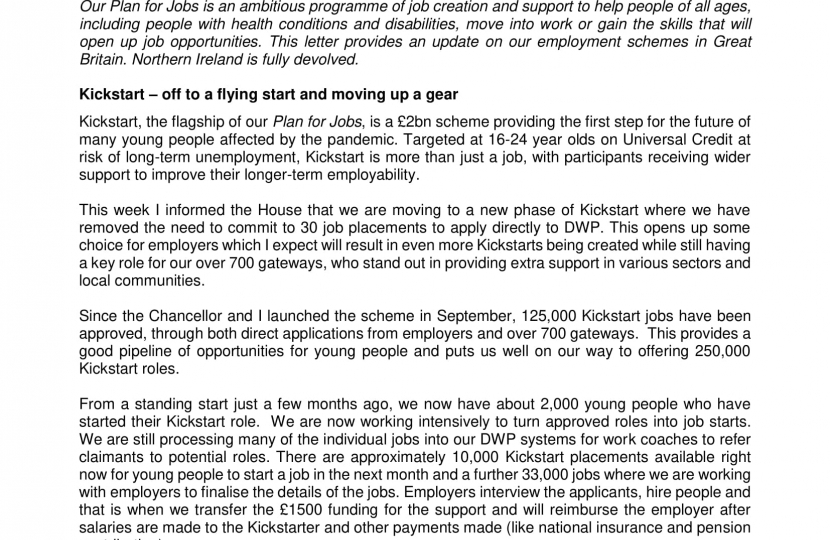 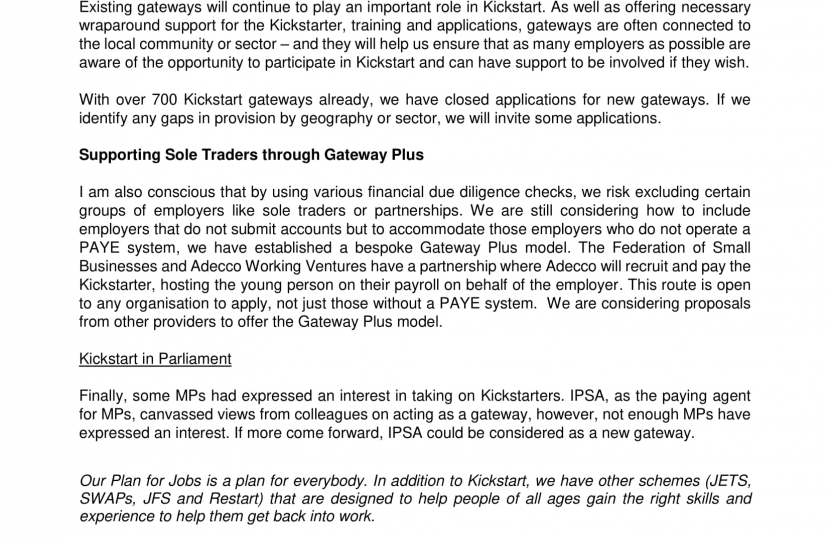 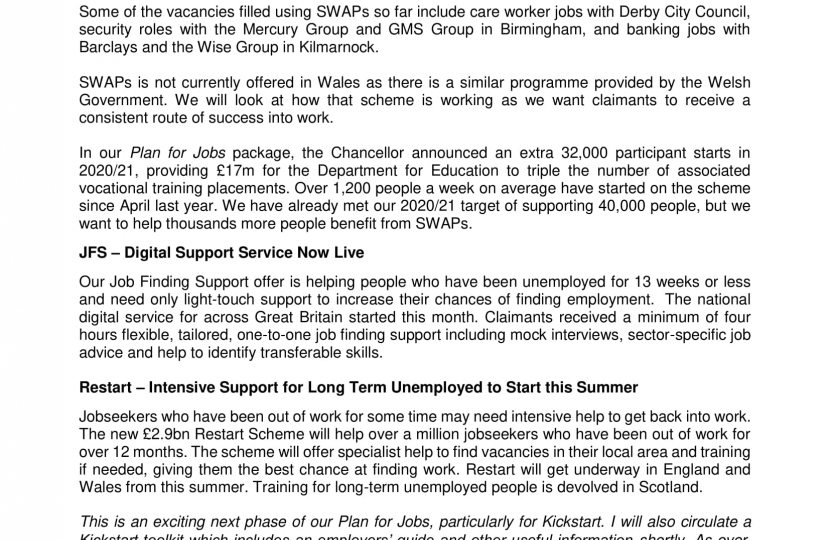 Our Plan for Jobs is an ambitious programme of job creation and support to help people of all ages, including people with health conditions and disabilities, move into work or gain the skills that will open up job opportunities. This letter provides an update on our employment schemes in Great Britain. Northern Ireland is fully devolved.

Kickstart – off to a flying start and moving up a gear

Kickstart, the flagship of our Plan for Jobs, is a £2bn scheme providing the first step for the future of many young people affected by the pandemic. Targeted at 16-24 year olds on Universal Credit at risk of long-term unemployment, Kickstart is more than just a job, with participants receiving wider support to improve their longer-term employability.

This week I informed the House that we are moving to a new phase of Kickstart where we have removed the need to commit to 30 job placements to apply directly to DWP. This opens up some choice for employers which I expect will result in even more Kickstarts being created while still having a key role for our over 700 gateways, who stand out in providing extra support in various sectors and local communities.

Since the Chancellor and I launched the scheme in September, 125,000 Kickstart jobs have been approved, through both direct applications from employers and over 700 gateways. This provides a good pipeline of opportunities for young people and puts us well on our way to offering 250,000 Kickstart roles.

From a standing start just a few months ago, we now have about 2,000 young people who have started their Kickstart role. We are now working intensively to turn approved roles into job starts. We are still processing many of the individual jobs into our DWP systems for work coaches to refer claimants to potential roles. There are approximately 10,000 Kickstart placements available right now for young people to start a job in the next month and a further 33,000 jobs where we are working with employers to finalise the details of the jobs. Employers interview the applicants, hire people and that is when we transfer the £1500 funding for the support and will reimburse the employer after salaries are made to the Kickstarter and other payments made (like national insurance and pension contribution).

We have had a lot of applications and not every application has been successful, as we have sought to ensure that the roles are additional genuine jobs that are accompanied with good quality training and wraparound support for the Kickstarter. Unlike the job retention furlough scheme, where employers are reimbursed for existing employees, we are providing grants to employers for these newly created jobs and need to be careful in how we distribute taxpayers’ money accordingly. As well as quality assurance, we have also undertaken appropriate financial due diligence checks to assess financial viability and to avoid fraud and error. This has meant that we have not included recently created companies, nor those significantly behind on standard company practice like submitting accounts to Companies House. We are also using the PAYE Real Time Information system as a pragmatic way of establishing that Kickstarters are actually working.

From February 3rd, I am making it even simpler for employers to offer Kickstart jobs, by allowing direct applications for any number of new, additional roles as well as the gateway route.

Previously, any employer offering fewer than 30 roles (over the lifetime of the scheme) had to use a gateway. This threshold of 30 was taken from the Future Jobs Fund when intermediaries were the only way to access that fund. The outcome of opening up Kickstart to direct applications in September is that we have already approved more jobs than was ever achieved in the Future Jobs Fund and I expect lifting this threshold will help even more. We will continue our quality assurance and financial due diligence which means that employers may still be rejected and could be referred to apply through a gateway, particularly to help with employability support.

Existing gateways will continue to play an important role in Kickstart. As well as offering necessary wraparound support for the Kickstarter, training and applications, gateways are often connected to the local community or sector – and they will help us ensure that as many employers as possible are aware of the opportunity to participate in Kickstart and can have support to be involved if they wish.

With over 700 Kickstart gateways already, we have closed applications for new gateways. If we identify any gaps in provision by geography or sector, we will invite some applications.

Supporting Sole Traders through Gateway Plus

I am also conscious that by using various financial due diligence checks, we risk excluding certain groups of employers like sole traders or partnerships. We are still considering how to include employers that do not submit accounts but to accommodate those employers who do not operate a PAYE system, we have established a bespoke Gateway Plus model. The Federation of Small Businesses and Adecco Working Ventures have a partnership where Adecco will recruit and pay the Kickstarter, hosting the young person on their payroll on behalf of the employer. This route is open to any organisation to apply, not just those without a PAYE system. We are considering proposals from other providers to offer the Gateway Plus model.

Finally, some MPs had expressed an interest in taking on Kickstarters. IPSA, as the paying agent for MPs, canvassed views from colleagues on acting as a gateway, however, not enough MPs have expressed an interest. If more come forward, IPSA could be considered as a new gateway.

Our Plan for Jobs is a plan for everybody. In addition to Kickstart, we have other schemes (JETS, SWAPs, JFS and Restart) that are designed to help people of all ages gain the right skills and experience to help them get back into work.

JETS – Blasts Off in Scotland

This week, JETS – our Job Entry Targeted Support Scheme – which gives people the skills and confidence they need to fuel their job search and take up new opportunities to get back into work, lifted off in Scotland, backed by a £21.7 million investment.

Targeting those out of work for three months or more, JETS boosts support for claimants to give jobseekers access to the tailored, flexible support needed to quickly move back into employment. Jobseekers also receive specialist advice on how they can move into growing sectors where jobs are available, as well as CV and interview guidance.

The programme has already had early successes across England and Wales since it launched in October – with more than 40,000 jobseekers referred to the programme in its first 50 days, equating to around 800 per day, giving job hunters the boost they need to return to employment through an action plan agreed with their personal adviser, peer support and signposting to opportunities to build vital skills.

SWAPs – Sector-Based Work Academy Programmes - is supporting people in England and Scotland to upskill, retrain and pivot towards surging sectors, including construction, infrastructure and social care in line with local labour markets and employer demand. SWAPs delivers mutual benefits for employees and employers, allowing jobseekers to quickly find a route into a new sector and offering a guaranteed interview for a real job at the end of a placement.

Some of the vacancies filled using SWAPs so far include care worker jobs with Derby City Council, security roles with the Mercury Group and GMS Group in Birmingham, and banking jobs with Barclays and the Wise Group in Kilmarnock.

SWAPs is not currently offered in Wales as there is a similar programme provided by the Welsh Government. We will look at how that scheme is working as we want claimants to receive a consistent route of success into work.

In our Plan for Jobs package, the Chancellor announced an extra 32,000 participant starts in 2020/21, providing £17m for the Department for Education to triple the number of associated vocational training placements. Over 1,200 people a week on average have started on the scheme since April last year. We have already met our 2020/21 target of supporting 40,000 people, but we want to help thousands more people benefit from SWAPs.

Our Job Finding Support offer is helping people who have been unemployed for 13 weeks or less and need only light-touch support to increase their chances of finding employment. The national digital service for across Great Britain started this month. Claimants received a minimum of four hours flexible, tailored, one-to-one job finding support including mock interviews, sector-specific job advice and help to identify transferable skills.

Jobseekers who have been out of work for some time may need intensive help to get back into work. The new £2.9bn Restart Scheme will help over a million jobseekers who have been out of work for over 12 months. The scheme will offer specialist help to find vacancies in their local area and training if needed, giving them the best chance at finding work. Restart will get underway in England and Wales from this summer. Training for long-term unemployed people is devolved in Scotland.

Heather Wheeler has welcomed the latest figures showing 29.3 per cent of people in South Derbyshire have now received a vaccine.
In total, more than 19.3 million doses have been administered to over 18.6 million people across the United Kingdom – equivalent to 1 in 3 adults.