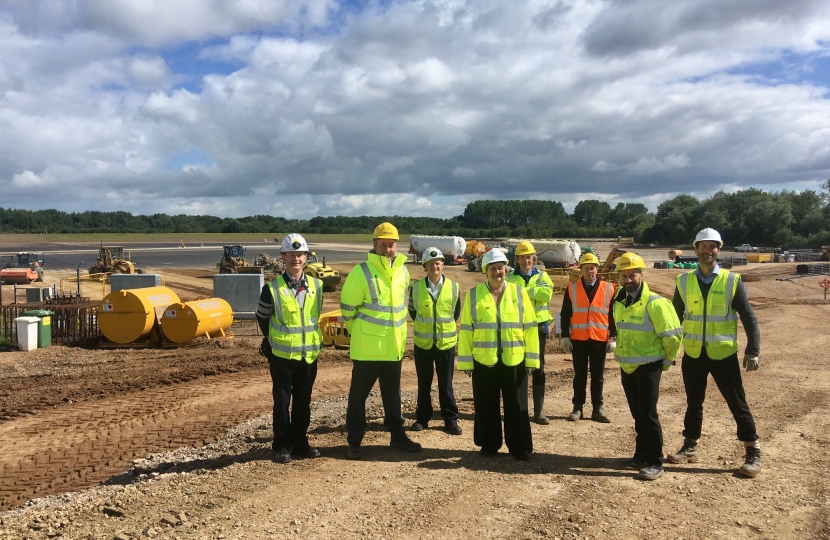 We are all too aware of the impact of climate change and the need to protect the environment so I was delighted to be invited to see a revolutionary road construction being used to build a new Derby Hub at the Toyota site in Burnaston.

From the very beginning Toyota have sought to be environmentally friendly in every way so it comes as no surprise that they decided to use this new technology for their expansion.

Normal road construction involves the need to dig out the site to a depth of 3 feet and take all of that material away in lorry loads to landfill and then bring lorry loads of stone back in to form the base, stone which itself has had to be excavated.

The new system being used by Derbyshire firm Whitehouse Construction is called RoadCem and was developed in the Netherlands. No material has to be taken away, the ground is churned to a depth of 1 foot and mixed with Synthetic Zeolites, is flattened, goes hard and forms the base for the tarmac to be put on. Independent analysis has concluded use of this method of construction would extend the life of an airport runway from 39 years under conventional construction methods to 2,309 years if constructed with RoadCem which is amazing.

Toyota estimate this new technology has eliminated 3000 heavy lorry journeys in and out of the site. Those lorries would have consumed thousands of litres of diesel which would have added to our air pollution, would resulted in wear and tear on our roads and disrupted local traffic. It is also a quicker, cleaner and cheaper process, so it is a win win all round. Congratulations to Whitehouse Construction for bringing this new product to the UK and for Toyota for realising the huge impact on Climate Change that the new way of building roads and car parks can have.

I was very impressed and will be speaking to Ministers about RoadCem. I am sure it is the future of road building and hope to see it rolled out across Derbyshire and the UK.

The Trans-Pacific free trade area is one of the world’s largest and most dynamic free trade areas. As Britain looks to the future, we are keen to work with other nations that champion free and fair trade.