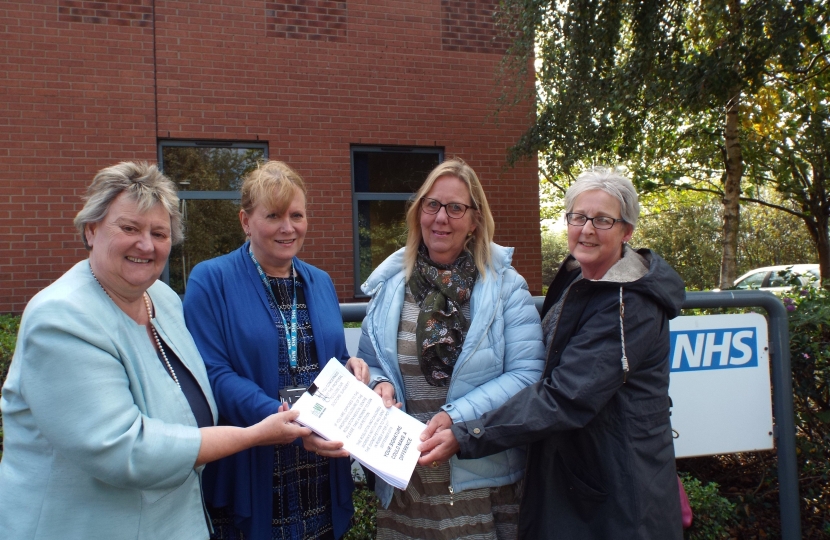 Heather Wheeler, MP for South Derbyshire, together with Mrs Gillian Holland and Mrs Suzanne Passey of the Rosliston & Cauldwell Women’s Institute this afternoon delivered a petition of some 791 signatures to the East Staffordshire Clinical Commissioning Group (CCG) in Burton-upon-Trent against the proposals for the future of Rosliston Medical Centre.

In July, Stapenhill Medical Centre, the managing practice for services at Rosliston, called two public meetings to discuss the problems they were experiencing with recruiting and retaining GPs, the centre’s IT system and the condition of the premises at Rosliston Medical Centre. Three options for the way forward were provided to patients:

1 – Do nothing. Close Rosliston on days that cannot be staffed safely. Closures may get more frequent as more doctors are lost.

2 – Reduce services at both sites. Fewer surgeries offered at both sites and a reduction in the patient list size as a result. Patients would be asked to register at other practices.

Mrs Wheeler has been vocal in her opposition to the closure of Rosliston Medical Centre and has written to the relevant NHS bodies involved with the decision making process to highlight the concerns of patients.

Following the presentation of the petition to Ms Sally Young, Director of Corporate Services, Governance and Communications at the CCG, Mrs Wheeler said:

“Rosliston WI, and specifically Gillian and Suzanne, have worked so hard in making the case for keeping Rosliston Medical Centre open and the number of signatures they have collected is fantastic.

This petition is another example of the huge public concern and anger at the possible closure of Rosliston Medical Centre and I hope that the Stapenhill Medical Centre, the East Staffordshire CCG and NHS England are listening to the views of their patients.”

“The two meetings called by Dr Needham and held in Rosliston & Cauldwell Village Hall at the end of July showed that there was an enormous amount of support for the doctors to keep the surgery open.

There was a clear expression of appreciation for the quality of service at Rosliston and recognition that the branch surgery is vital to the heart of the community of Rosliston and surrounding villages.

Rosliston and Cauldwell WI felt it was important to help to represent the views of the community and that was why we raised the petition. The timeframe for the potential closure of Rosliston Medical Centre has not been made clear, so we felt under pressure to do something quickly. At the next committee meeting it was agreed that we should focus our efforts over two weeks in September in order to provide a timely expression of the community’s strength of feeling to the CCG. Given more time, we are sure the response would have been even greater.

We are delighted to have the support of Heather Wheeler MP as we present our petition to East Staffs CCG.”